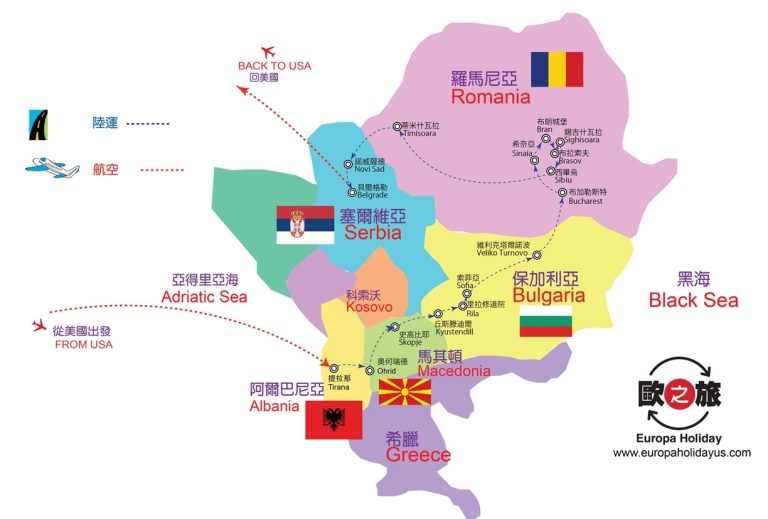 Today, we will take overnight flight to Tirana, arrive the next day.

Tirana is the capital of Albania and the center of its politic, economy, culture & transportation. Tirana was a village, after the settlement of the Ottomans, it developed to a unique city. Upon arrival transfer to hotel and check-in.

After breakfast, city tour will follow: Skanderberg Square, Et ‘Hem Bey Mosque, Place of Culture and Congress Building.   Continue to Ohrid, we will visit ★St. Pantheleimon Monastery, many archaeologists believe that the monastery was the site where the first students of the Bible were taught.  Later to Lake Ohrid, one of the deepest and oldest lakes in Europe and was declared UNESCO World Heritage Site. We will take ★boat excursion on Lake Ohrid.  Overnight at Ohrid.

This morning, depart for Skopje, the capital of Macedonia. We will tour old town, Memorial House of Mother Teresa, a humanitarian & Nobel Peace Prize laureate. Continue to Stone Bridge, built in the 6th century by Byzantine emperor Justinian. Later, depart for Kyustendill in Bulgaria.

This morning, we will visit ★Rila Monastery (UNESCO World Heritage Site) located in deep valley of Rila mountains. Established in the 10th century, it was destroyed by fire at the beginning of the 19th century, the complex was rebuilt and is the symbol of Slavic culture and identity during centuries of occupation.  Later, depart for Sofia–the capital of Bulgaria.

After breakfast, city tour will follow: ★Boyana Church located on the outskirts of Sofia. The Church has 3 buildings. The frescoes in the 2nd church painted in 1259 is the most important collections of medieval paintings. This Church is one of the most complete and well preserved monuments of Eastern European medieval art.  Continue to Sofia, we will visit ★St. Petka Church of the Saddlers, a medieval Bulgarian Orthodox church. To ★St Alexander Nevsky Cathedral, it has gold-plated domes with bell towers. Built in Neo-Byzantine style, also is the primary tourist attractions.  We will also tour Russian church, folk museum, the parliament. Later, depart for Veliko Tarnovo.

Veliko Tarnovo is a city in north central Bulgaria, often referred as “City of the Tsars”. Upon arrival, city tour will follow, shortly after to ★Tsarevets Fortress–a medieval stronghold located on a hill. The complex consists of palaces, monasteries, churches, residential buildings, gates and shops. Later, depart for Bucharest Romania.

After breakfast, city tour will follow: ★Parliament Palace, built by Nicolae Ceausescu. The palace has more than 100 rooms. Then to The Arch of Triumph, The Opera House, Victory square, University square, and Revolution square. We will also visit ★Museum of Romanian Peasant: the Museum has unique collection of traditional peasant costumes, artwork and restored houses.

After breakfast, depart for Sinaia, located in a mountainous region on the Prahova River valley. City tour will follow: to ★Peles Castle–a Neo-Renaissance castle built by King Carol I as his summer home. The castle has 160 rooms with world cultural themes. Later, depart for Bran, located in the city of Brasov. Upon arrival, we will visit ★Bran Castle, a popular tourist attraction because it resembles the home of Dracula.  Continue to Brasov, city tour will follow: Plaza de la villa, Black Church (Entrance admitted by permission only).

This morning, depart for Sighisoara, located on the Tarnava River in Transylvania region. It is well preserved walled town, a UNESCO World Heritage Site. We will visit Citadel. Continue to Sibiu, about 134 miles north-west of Bucharest. The city is surrounded by medieval wall, the Upper town has many historic sites such as Great Square, Orthodox Cathedral; the Lower town: The Bridge of Lies, The Stairs Passage and many colorful houses on cobblestone streets.

This morning, depart for Timisoara, located in western Romania. It was under Austrian Empire before WWI. Timisoara is also known as “Little Vienna” due to its distinct architectural character.  City tour will follow: The Cathedral, Opera House, and ★Memorial Museum of 1989 Revolution.

This morning, depart for Novi Sad, the 2nd largest city in Serbia, also the center of culture & education. City tour will follow: Liberty Square, the gathering place for many events, Town Hall, Theatre Square. We will visit ★Petrovaradin Fortress on the right bank of the Danube. It was built in the 17th century, a cultural and historical monument.  We will overnight in Belgrade.

Belgrade is the capital of the Republic of Serbia, it lies on the confluence of the Save and Danube River. We will visit: ★Kalemegdan Fortress, it used to be an important military fortification. Walk down the fortress to old town, there are: Republic Square, National Museum, Old Royal Palace, St Mark’s church.  We will visit ★Saint Sava Cathedral, the largest’s Orthodox temple, built from 1935.   Later, to the tomb of Josip Broz Tito, the first president of Yugoslavia.

This morning transfer to airport for homebound flight and ends this unforgettable journey.

*Tour fare, air ticket, airport  tax and fuel surcharge are subject to change base on fluctuation in price, please  contact us for more info