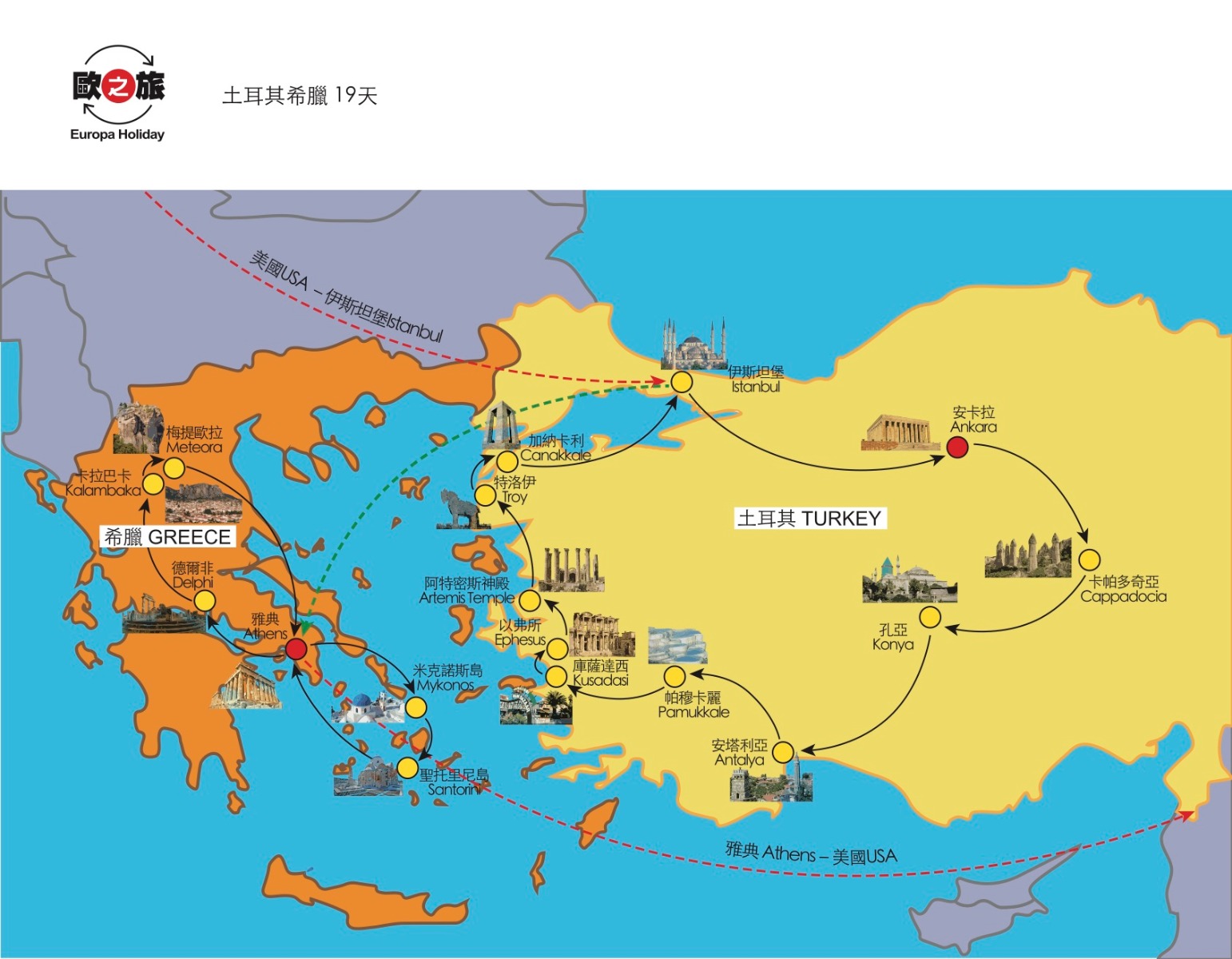 ★Kaymakli Underground City, where people of Kaymakli built their living spaces, kitchen, storage rooms, cellars, stable etc. under the hill thousands of years ago. Cappadocia is an area in central Turkey known for its unique moon-like landscape Later, a brief stop at ★Turkish carpet studio

This morning we will drive through hilly region to Konya (the old capital of Turkey, birthplace of Whirling Dervishes dance) via ◎Sultanhani Caravansarai. After lunch, visit ★Mevlana Museum and ★Alaeddin Mosque. Later depart for Antalya.

After breakfast, depart for Duden Falls near Antalya. Upon arrival, take
★ boat ride to Duden Falls. Continue to Aspendos, we will visit

★Roman Theater and ◎Aqueduct. Afternoon, continue our tour to Pamukkale also known as “Cotton Castle”. It is a natural terrace made of travertine deposited by water from hot springs. Tonight, enjoy a thermal bath at hotel (Don’t forget your swimsuits).

After breakfast, city tour will follow: to ★Hieropolis. Continue to★Ephesus, famous for its spectacular temples, library, and amphitheater. Later, brief stop for a ★leather show. Tonight, we will overnight in Kusadasi—a popular vacation destination in Turkey.

After breakfast, we will visit ◎Artemis Temple, a Greek temple dedicated to goddess Artemis and one of the seven wonders of the ancient world. The temple was destroyed, only foundations and sculptural fragment remain on the site today. Continue to ★Troy, explore mythical site of homer’s Iliad, Helen and the giant Trojan horse. Later depart for Canakkale and overnight here (Canakkale is popular town with limited hotel accommodations, if not available, we will overnight in Ayvalik).

This morning, transfer to airport for flight to Athens, Greece. Upon arrival, transfer to hotel & check-in, dinner at hotel.

Athens－ Mykonos (by flight, about 45 minutes)

★After breakfast, transfer to airport to Mykonos, the island with bright sunshine, sandy beaches, blue ocean, lazy holiday atmosphere, attracting tourists from all over the world. Upon arrival, transfer to hotel and check-in. Afternoon is free for you to explore this wonderful town. Mykonos also features vibrant nightlife with many pubs, disco, coffee shops, and restaurants.

Mykonos－Santorini (by ferry, about 2.5 hours)

★Today, transfer to port and aboard ferry to Santorini. The lively colors of the white Cycladic houses and blue painted windows contrast stunningly the black volcanic rock rising from the sea. Late afternoon, arrange excursion to Oia located in north-west of the island, known as an artist paradise, stroll between the alleys and enjoy stunning sunset view.

Today is at leisure; you can relax and explore the island on your own pace. Either to Fira-the capital of the island or take cable car (at your own expense) or riding donkey through narrow alleys. (Lunch & dinner is not included).

Santorini / Athens (By flight, about 45 minutes)

★After breakfast, depart for Athens by air. Upon arrival, transfer you to Cape Sounio, located on the southernmost tip of Attica. On sunny day, you will be impressed by the lovely view of the sea and Saronic Gulf Islands. Later, return to Athens, you can explore old town at your own pace, there are many boutiques, cafes and restaurants.

After breakfast depart for Delphi, also known as “World Center”. In Mythology, Delphi was the meeting place of two eagles sent by Zeus in opposite directions. They met in Delphi indicated the center of the earth. Delphi is also known as the worship center for the God Apollo.

★Delphi Museum to view famous” navel of the earth”, the finding of Temple of Apollo, Temple of Athena

After breakfast, travel to Meteora located in Thessaly plains, massive gray colored rocks rise towards the sky and monasteries perched on top of enormous rocks. These breathtaking landscapes were sculpted by wind and water over thousands of years. In 14th century, a monk from the north amazed by these natural beauties and hand-built the first monastery. There were total of 24 monasteries before, now only 6 turned into museums for visitors.

★The Monastery of Great Meteoron is the largest of the monasteries, built between 1483 and 1552. One building serves as the main museum for tourists

★The Monastery of Roussanou was founded in the middle of the 16th century and decorated in 1560. Today it is a flourishing nunnery with 13 nuns in residence

After breakfast, depart to airport for homebound flight to US and ends this unforgettable journey.

Tour Fare Excludes:  International airfare, Personal expense, any expense not included in our itinerary, Tips (tour leader, bus driver, local guide: US10 per person for Turkey, Euro 10 per person for Greece), Visa Fee, Travel Medical Insurance (If full payment paid 60 days prior to departure date, we offer medical travel insurance for US residence only)
**Registration and reservation must also pay a deposit of USD $ 500 per person(Once the group is confirmed, the deposit becomes non-refundable, it can be used for future credit for tour group
** If you purchase air ticket on your own, your arrival time to the first destination and your departure time from last destination to U.S. must be the same as our group. If not the same, you must arrange your own transportation to meet group and to airport on the last day **

Notes:
*Tour fare is per person in double occupancy
*Child Fee: 2-11 years old share bed with parents, otherwise will be count as adult fare
* Single supplement is for one person occupying one single room with one bed
*Tour fare, air ticket, tax and fuel surcharge are subject to change based on fluctuation in price, please call us when register our tour*