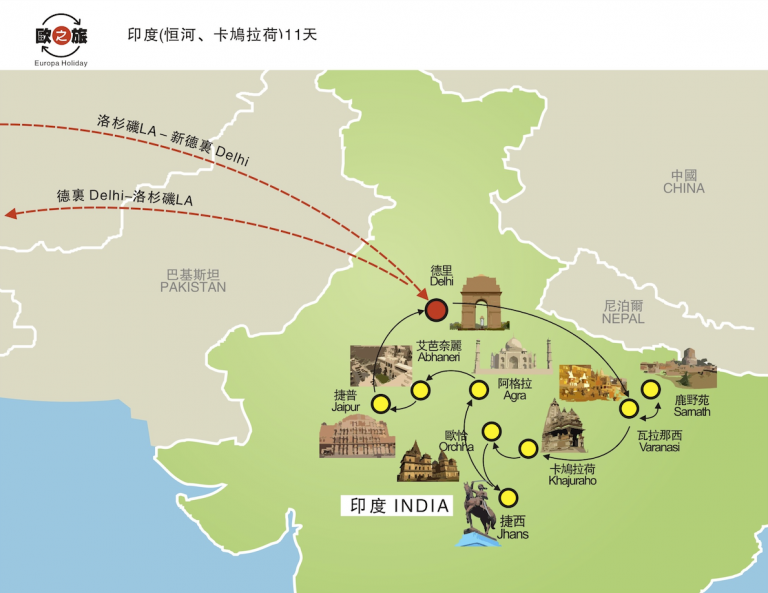 Today, we will take overnight flight to Delhi, the capital of India, arrive the next day.

Upon arrival, transfer to hotel & check-in.

After breakfast, transfer to airport for flight to Varanasi—since the 6th century BC, Varanasi has been the destination for pilgrims who seek blessing and purification in the river’s holy waters.  Shortly after arrival, sightseeing tour will follow: To ★Sarnath, where Buddha gave his first sermon. We will visit Sarnath Museum, then to ★Mulgandha Kuti Vihar, a new temple and well known for its murals.

After breakfast, transfer to historic Orchha, a beautiful medieval town was once the capital of Bundela Kings. City tour will follow. After lunch, ★board train (about 2 & half hours) from Jhansi Railway station and travel to Agra.

Early morning, we will visit world famous ★Taj Mahal–one of the most graceful and extravagant monuments in India. A symbol of endless love and devotion of Emperor Shan Jehan to his beloved queen Mumtaz Mahal. Return to hotel for breakfast, shortly after breakfast, to ★Agra Fort, built by Emperor Akbar and beautified with palaces and gardens by Jehangir. It was here that Shahjahan died after seven years of imprisonment.  Later, visit ★marble store to see marble inlay work.  Continue to ★Sikandra, we will visit the Tomb of Akbar the Great, built between 1605-1613. The buildings are constructed from red sandstone with white marble.  Later, a brief stop at ★cashmere wool store.

After breakfast, transfer to the Pink City – Jaipur via Abhaneri. Abhaneri is a village about 95km from Jaipur.  We will visit Chand Baori Step Well, a unique way to reserve rainwater during harvest season. Then to Harsh Mata Temple, dedicated to the goddess Harshat Mata and is regarded as the goddess of Joy & Happiness.  Afternoon, upon arrival in Jaipur, city tour will follow: ★City Palace, ★the Museum and  Wind Palace, its unique five-story exterior with 953 small windows. The original intention was to allow royal ladies to observe everyday life in the street below without being seen.  Continue to Birla Temple, built entirely of white marble.  Later to ★carpet factory to experience weaving art and Sari-Indian’s traditional clothing.

After breakfast, we will ★ride an elephant to ★Amber Fort located high on the hill. It was built in 1592 by Raja Man Singh. Visit the Mirror Palace, famous of its inlaid panels and mirrored ceiling. Then we will travel down by ★jeep, a brief photo stop at Water Palace– used to be royal family retreat in the summer. Later, depart for Delhi en route to ★jewelry store for a short stop.

After breakfast, city tour will follow: to India Gate, Presidential Palace, the Parliament & ★Gandhi Memorial Museum. The museum has many collections of relics, journals, photos related to Gandhi (If museum were closed, we will tour Raj Ghat). After dinner, transfer to airport for homebound flight to US and ends this unforgettable journey.

• If group size is 10 people and more, tour is conducted in Mandarin

*Tour fare, air ticket, tax and fuel surcharge are subject to change based on fluctuation in price, please call us when register our tour